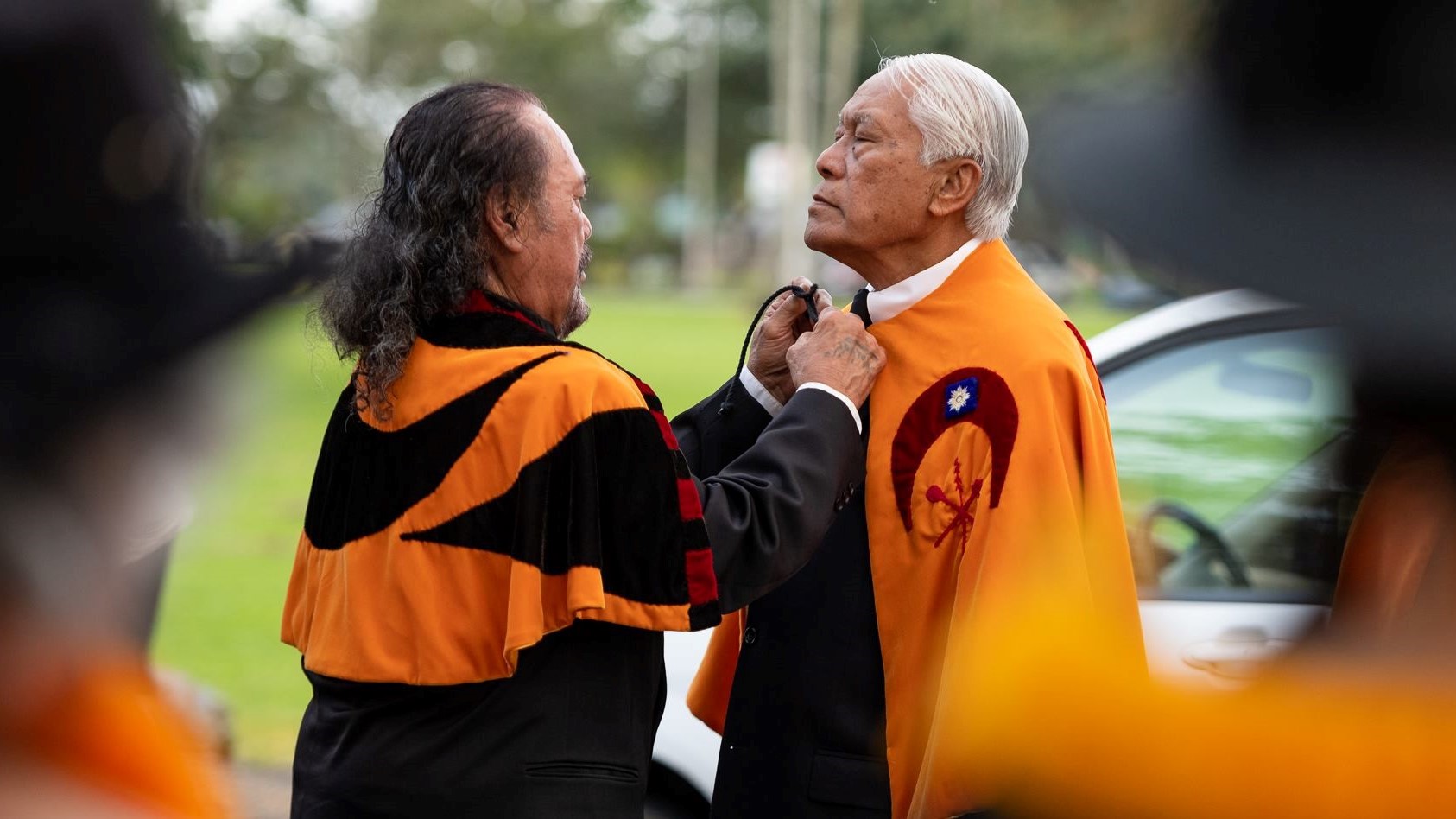 April 11, 1865, Establishment of the Order
Authorized by the 35th Article of the 1864 Constitution of the Kingdom of Hawai‘i,
King Kamehameha V established the Order of Kamehameha I by Royal Decree on April 11, 1865 at the ‘Iolani Palace. The Royal Decree was made with the endorsement of the King’s Privy Council of State and establishes the Order’s mission and authorizes the Order to carry out its kuleana, in perpetuity, as an institution of the Kingdom of Hawai‘i (Hawaiian Gazette, April 29, 1865).

January 17, 1893, Overthrow of the Kingdom
Queen Lili‘uokalani’s attempt to promulgate a new constitution galvanized opposition forces composed of Hawai‘i born citizens of American parents, naturalized citizens, and foreign nationals. This group, with the support of the American Minister to Hawai‘i, orchestrated the Overthrow of the Hawaiian monarchy and the establishment of a Provisional Government.

Historical Note:
At the time of the Overthrow, Queen Lili‘uokalani acted as the Grand Master (Supreme Head) of the Order.

January 17, 1893, Order Goes Underground
Following the illegal Overthrow of Queen Lili‘uokalani and the Kingdom in 1893, the Order was considered a threat to national security and suppressed by the Provisional Government and subsequent Republic of Hawai‘i. As a result, the Order was forced to exist as a secret underground society.

May 13, 1902, Beginning of the Reorganization of Order
On or about May 13, 1902 a group of prominent Hawaiian men met in Honolulu under the leadership of Dr. George H. Huddy, Territorial representative from Kaua‘i, with the specific aim of re-establishing the Royal Order of Kamehameha I. Present at this meeting in addition to George Huddy was James H. Boyd, Abraham Fernandez, Charles H. Rose, William H. Coney, John H. Wise, Rev. J. M. Ezera, David K. Aiona, John K. Nako‘oko‘o, and others.

April 18, 1903, Petition for a Name
On April 18, 1903, a petition was filed with the Treasurer of the Territory, the Hon. A.M. Kepoikai by Henry Smith, Mark P. Robinson, John D. Kolb, Jr., G.E. Smithies, William H. Coney, Carlos A. Long, Issac M. Sherwood, George H. Huddy, Palmer Parker Woods, David Kanuha, Samuel C. Dwight, and John Mauliola Ezera, for the purpose of organizing, forming, and maintaining, a secret association in Honolulu to be styled “Hawai‘i Chapter No. 1, of the Territory of Hawai‘i” and to have and to hold the right to establish subordinate associations throughout the Territory of Hawai‘i. This petition was denied.

Again on May 8, 1903, a second petition was filed with the Treasurer of the Territory, signed by Henry Smith, Mark P. Robinson, John D. Holt, Jr., Samuel C. Dwight, John M. Ezera, and Issac H. Sherwood, with the name changed to “Hawai‘i Chapter No. 1.” The petition was granted.

May 13, 1903, First Meeting of Hawai‘i Chapter No. 1 Order
On May 13, 1903, at the old “Foster Hall” in Honolulu, the first formal organizational meeting of the Order took place. Prince Jonah Kuhio Kalanianaole was chosen the first Ali ‘i ‘Ai Moku, the highest post in the Order, a position that he held until his death on January 7, 1922.

June 11, 1903, Public Declaration
Prince Jonah Kūhiō Kalaniana‘ole, lead a torchlight ceremony around the statue of Kamehameha I (Oahu) and publicly declares the restoration (return to public light) of the Order on June 11, 1903.

Historical Note
As the last surviving designated heir to the throne, had it not been for the overthrow, Prince Kūhiō would have succeeded Queen Lili‘uokalani as King of Hawai‘i and Grand Master of the Order. As such, Prince Kūhiō possessed the mana (authority and power) to reorganize and perpetuate the Royal Order of Kamehameha I as it exists today.

1921 Men Of Hawaii Reference Library
A biographical reference library edited by John W. Siddall is published by the Honolulu Star-Bulletin, Territory of Hawaii in 1921. Many members of Māmalahoa are recognized in this work including Ali‘i ‘Aimoku Noa Webster Aluli (pg 11) and William H. Beers (pg 41).
Electric copy at: http://books.google.com

1933, Mamalahoa Highway
In 1933 the County of Hawai‘i recognized Māmalahoa, by naming its new round-the-island belt road in its honor as Mamalahoa Highway. Note: This is contrary to the common yet mistaken assumption that the highway was named after Kamehameha’s “Mamalahoe Kanaawai” or “Law of the Splintered Paddle” which provided safe travel and passage for commoners, first on Moku O Keawe then throughout a untied Hawai‘i.

The officers and committee members for the year were:

September 2, 1950, Māmalahoa Host Order Convention
Twenty-first annual convention held in Hilo, Labor Day weekend. Largest in history of the organization (actually the first convention at Waimea, Kaua‘i in 1924 was the largest). One hundred delegates to attend including 28 from host group, Māmalahoa Chapter. There were 12 delegates from Moloka‘i [Kalaniana‘ole – Chapter 5], 36 delegates from O‘ahu [Hawai‘i Chapter 1], 14 delegated from Maui [Kahekili – Chapter 4], and 6 delegates from Kaua‘i [Kaumuali‘i – Chapter 3]. Convention opened in the morning and a lūʻau will be held at the American Legion Clubhouse this evening.

Sunday and Monday – Programs include sightseeing and sports. Delegates will leave for home late Monday morning. This is the fiest convention of the Order in Many years in which all five Chapters in the Territory are represented. “Hilo Is Host To Order of Kamehameha” Honolulu Star Bulletin, September 2, 1950.

August 28, 2007, HTA Award
At a ceremony held August 28, 2007 at the Hawai‘i Convention Center, the Hawai‘i Tourism Authority (HTA), the state agency for tourism, announced the recipients of the prestigious Keep It Hawai‘i Recognition Awards. Awards were presented to individuals, organizations and businesses in recognition of their commitment to perpetuate the Hawaiian culture. Recognizing long-term and exemplary commitment to perpetuating and preserving Hawai‘i’s host culture, the 2007 Lehua Maka Noe Award was presented to Māmalahoa. Māmalahoa was honored for presenting the Kamehameha Day Celebration on Moku Ola (Coconut Island), Hilo for the previous twenty-two years.

*Lieutenant Colonel Alexander Kahapea, 1936 KSB graduate, served in the Infantry in the European Theater and was the most highly decorated World War II veteran from Hawai‘i, and also served in Korea and Vietnam.