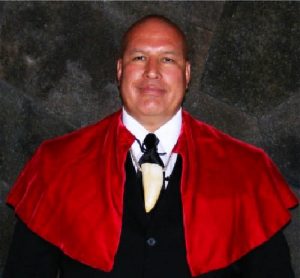 Originally conceptualized and developed under the direction of Mamo Hawai‘i Pua Ishibashi, the Māmalahoa website was initially launched by the University of Hawai‘i at Hilo in February, 2008. Under Ali‘i Ishibashi, the website was redesigned and relaunched in January, 2010 with the assistance of Julie and Christian Engelhardt of gumdesign.  In 2016 the website was updated and converted to WordPress under Lani Ali‘i Ishibashi who continues to act as website admin. today. 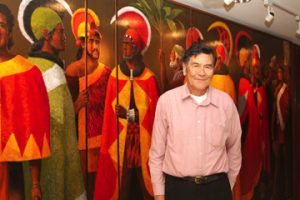 Na Ali‘i (A Gathering of Chiefs) is a stunning 15-by-7-foot mural painted by Hawai‘i’s foremost artist Herbert Kawainui Kane of Kailua, Kona, Moku O Keawe (Island of Hawai‘i). The painting depicts a summit of ali‘i (chiefs) of Moku O Keawe magnificent in ‘ahu ‘ula (feathered cloaks and capes) and mahi‘ole (feathered helmets), battle apparel of the ali‘i. The highest ranking ali‘i wear the lei niho palaoa (carved whale tooth pendant on human hair), a prized symbol of ali‘i rank. At each end are young warrior ali‘i bearing the kāhili (feather standard of ali‘i). The guard on the left holds a pōhaku newa (stone-head club); while the guard on the right holds a leiomanō (shark’s tooth weapon). A third guard sounds a blast on the pū (triton conch shell). A chanting kahuna (priest), also of chiefly class, holds aloft a stalk of ki (ti leaf) as a signal that peace must be observed. Here Kamehameha wears a cloak made entirely of yellow feathers an emblem of his supreme status as Mō‘ī (King) of Moku O Keawe.

Mahalo nui to the late Mr. Kane for allowing Māmalahoa to feature this beautiful work of art on the Māmalahoa website. For more information on Herb Kane and his artwork please go to www.herbkanestudio.com. Note: Mr. Kane was a member of the Most Noble Order of Kamehameha.

Brook Kapukuniahi Parker is a recognized and well respected Native Hawaiian artist. Raised in Kahalu‘u, O’ahu, Brook’s family roots run deep in the islands being a direct descendant of John Palmer Parker, founder of the Parker Ranch on the Big Island of Hawaii. John Parker’s wife, Rachael Keli‘ikipikanekaolohaka Ohiaku was a great-granddaughter of Kamehameha the Great and his wife Kanekapolei. The majority of Brook’s art portrays the deep love and admiration he has for his ancestors. As a child, Brook was influenced by his father David, a gifted artist, painter, Hawaiian historian, genealogist, and writer.  As Brook grew older his father’s artistic interest became his interest. As an artist, Brook has illustrated numerous books and has an impressive list of clients including the University of Hawai‘i, Hawai‘i Board of Education, the Pacific American Foundation, and Kamehameha Publishinng to name a few. Brook is married to the former Drena-Jo Kauakoko’ipohaiapuninamoku Kalani and they are the proud parents of five beautiful children (two sons and three daughters). The Brooks Parker ‘ohana currently resides in Wailupe, O‘ahu.

Māmalahoa appreciates Brook’s kokua in allowing us to use a few of his works on our website. For more information on Brooks artistic works please visit www.hawaiianatart.org.